Max Verstappen has managed to win the Spanish Grand Prix for the second time in his career. After his win in 2016, it was exactly six years. The Red Bull Racing driver benefited from the retirement of Charles Leclerc and also owed his 25 World Championship points in part to good work by teammate Sergio Perez.

Verstappen experienced DRS problems, which prevented him from getting past George Russell for a long time. Eventually Red Bull decided to put Verstappen on a three-stop and it paid off. Perez was trounced, as was Russell. Carlos Sainz fell outside the podium after an early slide in Turn 4. Lewis Hamilton seemed to have the best papers for fourth place, which eventually went to Sainz, but temperature problems forced him to slow down quite a bit in the closing stages.

Russell enjoyed Verstappen battle: "Did all I could to keep him behind"

Perez swallows away disappointment: 'I'm happy for the team'

Valtteri Bottas managed to secure sixth place, just ahead of Esteban Ocon and Lando Norris. Fernando Alonso had to start from the very back of the grid, but with a P9 he doubled his world championship points tally. Yuki Tsunoda scored the final point. The Haas F1 team is one of the bigger losers. Kevin Magnussen and Mick Schumacher started in the top-ten, but failed to maintain their positions. 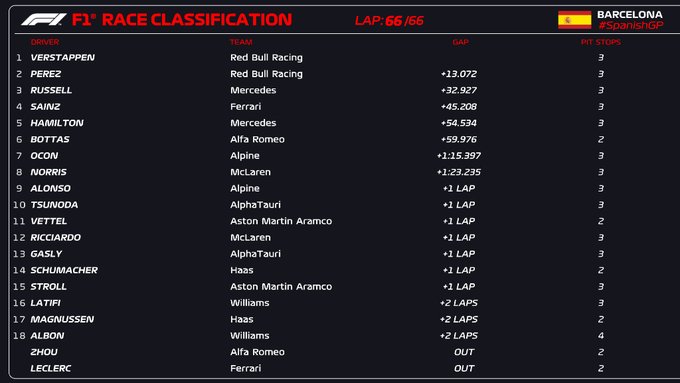