Helmut Marko joined ServusTV's Sport und Talk and of course Max Verstappen's damage at Silverstone was discussed. The Austrian explained how much Verstappen lost due to the lack of downforce.

Verstappen seemed to be on his way to a good result at the British Grand Prix. After the Dutchman took the lead from Carlos Sainz, victory seemed a given. However, this was not counting on a piece of carbon from Yuki Tsunoda's car. It was still on the Silverstone circuit and Verstappen drove over it.

Ecclestone refreshes Hamilton's memory: 'He has forgotten a lot'

In the ServusTV broadcast we saw a picture of a smiling Verstappen showing the debris, which is bigger than expected. The damage to the floor of the RB18 was therefore enormous. Marko stated that Verstappen lost more than twenty percent of downforce and therefore between 1.5 and 2 seconds per lap.

Praise for Verstappen: 'How often do you see that?

Verstappen himself initially thought the car was impossible to drive, but Red Bull wanted to keep driving as long as they were in the points. That turned out to be a good move, as Verstappen's seventh place ultimately secured him six more points, which could prove crucial at the end of the season. 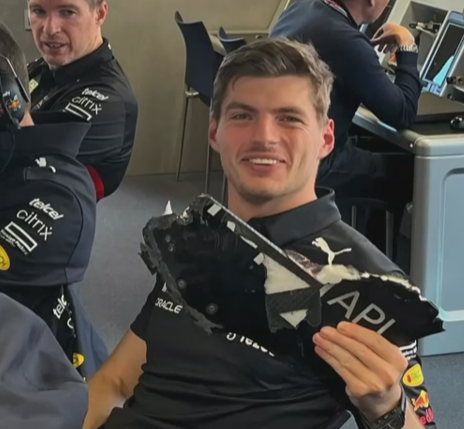