The Monaco Grand Prix is generally not the most exciting of the season. The very few overtaking opportunities more often than not make for a parade through the streets of Monte Carlo. Fortunately, there is still the weather factor, as there is a good chance that we will get heavy showers during the race on Sunday.

High chance of rain during the race

That a rain shower can cause quite some sensation is no news for Formula 1 fans and if there is one Grand Prix that could use some sensation it is the one in Monte Carlo. Sunday could well be a rain race, as the probability of precipitation during the race is 77 percent, reports Weather.com. Will this still provide some excitement on the street circuit?

The last time the Monaco Grand Prix was hit by rain was in 2016 when Lewis Hamilton won ahead of Daniel Ricciardo. And the seasoned Formula One fan may also remember the 1996 race. Olivier Panis won the spectacular race in the Ligier then. Whether the rain will actually fall, and to what extent, remains to be seen, but our fingers are crossed for a heavy downpour.

More than one shower in Monaco 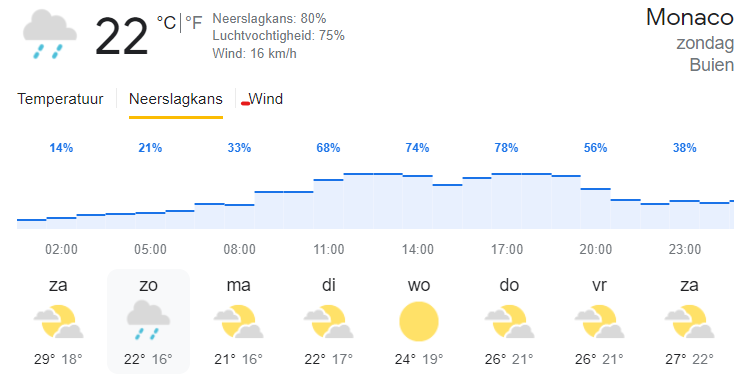