A picture has emerged of Lewis Hamilton standing suspiciously close to the RB18. Max Verstappen was punished for this in 2021, but this moment was not mentioned in Spain. Mercedes however deny that Hamilton was touching the rear wing. A subsequent video has emerged suggesting Hamilton doesn't touch the car, and instead does everything he can to avoid touching it as he squeezes by.

Hamilton and Max Verstappen battled it out for the world title in 2021, but in 2022 Mercedes and Hamilton have the edge for now. While the Dutchman leads the world championship, Lewis has only finished on the podium once in the first six races. That made him take a look at the RB18.

A picture has emerged from the Circuit de Barcelona-Catalunya showing Hamilton standing very close to Sergio Perez's RB18, according to sources at Parc Fermé. He almost looked to be touching the Red Bull's rear wing, while his personal assistant Angela Cullen looks on. This was not investigated during the weekend.

In Parc Fermé, you are no longer allowed to touch the cars, which earned Verstappen a €50,000 fine at the 2021 Brazilian Grand Prix. After qualifying, he touched the rear wing of Hamilton, who would later lose the pole because the rear wing opened too far.

That’s my video/photo, it’s still not clear weather he touched it or not pic.twitter.com/TcAToSIxzO

Mercedes tells GPblog that there was no contact with the RB18. The spokesman of the team says that Hamilton just did his best not to hit the car and that the photo is also an optical illusion. ''Some people seem to think he is touching the wing, but his hand isn't on it. At each end of the flap, you can see the white dot for legality - and the bracket which allows the flap to pivot when the DRS opens. Some people seem to think one of those brackets is his thumb - but it's clearly not, as it's the same on both sides," Mercedes said. 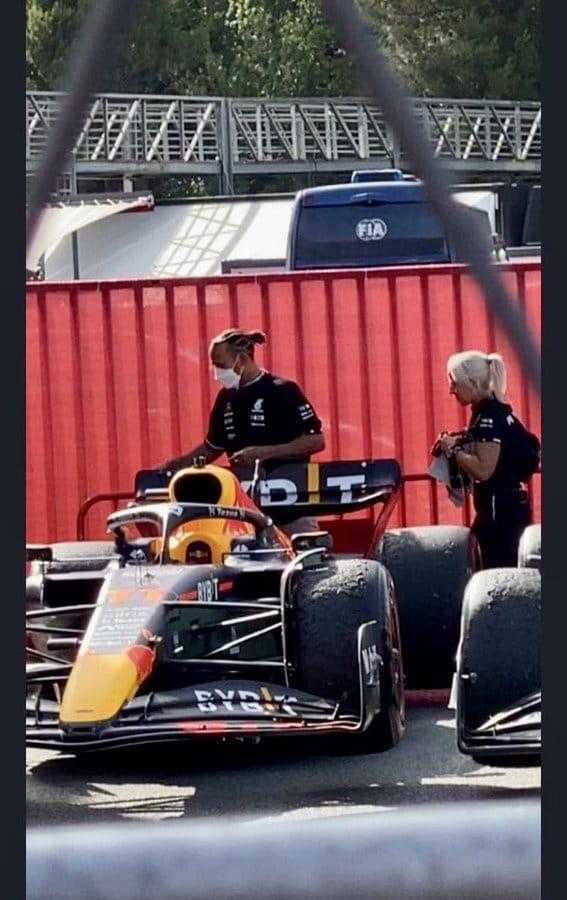 'Perez could have made sure he stayed ahead of Verstappen himself'