Valtteri Bottas has topped FP2 as preparations for the Chinese Grand Prix continue. The Finn led for much of the session after setting a 1.33.330 on the soft tyre and continued to clock some good laps on the medium and hard tyre when doing a race simulation. Sebastian Vettel finished the session 2nd only 0.027 seconds behind Bottas.

The session started with Vettel and then Leclerc going fastest. But after a spin and a lockup, Lewis Hamilton's Mercedes went fastest with a 1.34.226. Both Hamilton and Bottas spun in the early parts of the session and it seemed that the team had an issue with keeping the rear tyres up to temperature.

The teams returned to the pits and put on the soft tyre to run their qualifying simulation. Vettel came out and topped the timesheet with a 1.33.357. Hamilton tried to beat that time but it was his teammate Valtteri Bottas who went fastest with a 1.33.330.

Verstappen was set to clock a very fast time but a small mistake in the final corner saw him lose a few tenths leaving him to set a 1.33.551 to go third. It is thought that if he hadn't made that mistake he would have been very close to the top of the time board.

Teams started to test for longer stints and replaced the soft tyres with the medium and hard compound tyres.

"They race harder on a Friday than they do on a Sunday," says Vettel on the team radio about the Racing Point. All teams are free to do as they please during FP2 and they weren't doing anything wrong but it was a funny comment from the German!

With 20 minutes left in the session, Charles Leclerc was brought back to the garage and was forced to get out of his car and his session finished early. It is thought that there was some leak or issue with the car.

With just over 10 minutes left Lewis Hamilton switched back to the soft tyre to try and clock a fast time. However, he was unsuccessful and finished the session in 4th. 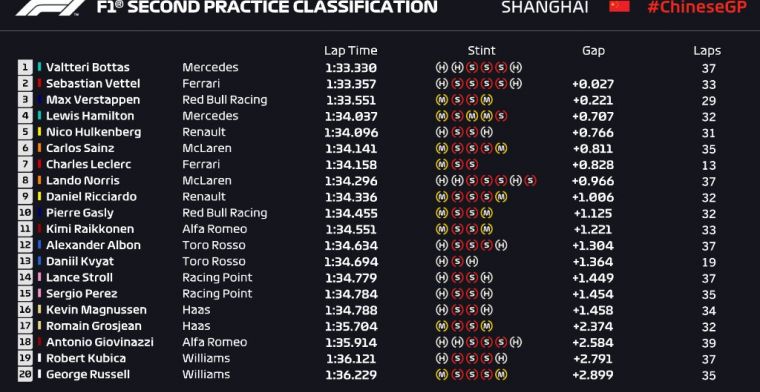