Lewis Hamilton reassured his fans after the Azerbaijan Grand Prix. The Briton was struggling to get out of his car and Toto Wolff wondered aloud if Hamilton would be able to be in action in Canada. The Briton will clarify that on Monday morning.

On Sunday evening, Hamilton already tweeted a message to the world thanking people for their support and letting it be known that he was looking forward to next week's Grand Prix. Doubts as to whether he would be fit enough to race have now been completely dispelled, following an update from the Briton on his Instagram account.

Hamilton will race in Canada

''Good morning world'', the seven-time world champion opens his Story on Instagram page. ''Yesterday (Sunday) was tough and had some troubles sleeping but have woke up feeling positive today. My back is a little sore and bruised, but nothing serious thankfully'', Hamilton let his followers know after the Grand Prix in Baku.

Ferrari filleted by Italian media: 'The euphoria is completely gone'

''I've had acupuncture and physio with 'ang' (Angela Cullen) and 'am'. We have to keep fighting. No time like the present to pull together and we will. I'll be there this weekend, wouldn't miss it for the world. Wishing everybody an amazing day and week'', concludes the Mercedes driver. 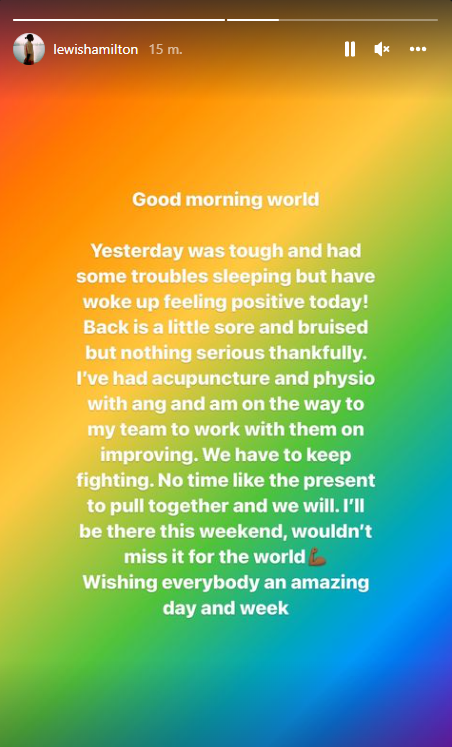