Max Verstappen was able to appear on the highest step of the podium this weekend, and that provides beautiful images. The Dutchman had a so-called podium camera at his disposal, which allows him to capture the action after the national anthems.

The podium cam is BACK @Max33Verstappen made a splash on the top step of the podium #ImolaGP #F1 @FerrariTrento pic.twitter.com/AmGZCwPByd

Verstappen showed his class at the start of the Imola Grand Prix. The Dutchman overtook polesitter Lewis Hamilton after starting from third place. A day earlier, Toto Wolff had been spotted on a skateboard, which Mercedes posted on Twitter saying, "He was a Sk8ter Boi." A day later, Red Bull Racing completed the rhyme.

Tip for Perez: "That has been the unravelling of Verstappen's previous teammates"

Lewis Hamilton bursts out laughing after a video of Sergio Perez. The Mexican is training his neck, but the image evokes something completely different for Hamilton. In his Story on Instagram, Hamilton captioned the video: ''The moment when during a date you have been holding back for a long time, but the moment she leaves you can let it all out. Sorry Checo, I had to do this'', the Brit says. 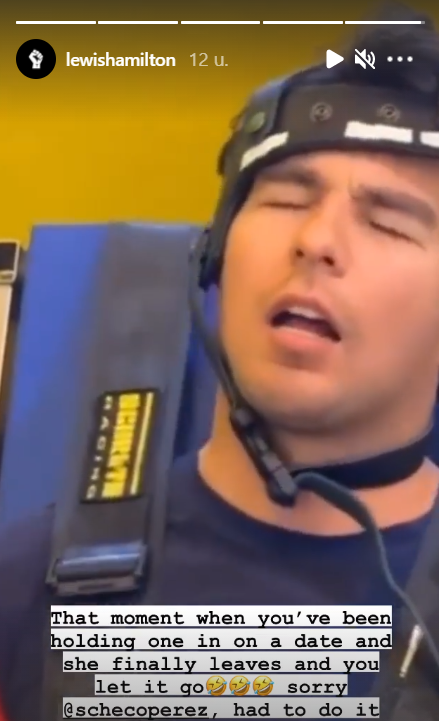 In Italy they know who the world needs

Alfa Romeo has also just arrived at Imola circuit. While there are no fans allowed during the weekend, the team shall surely feel supported by a banner that was put on a fence by fans of a certain driver.

McLaren and Alpine can unload trucks in sunny Imola

McLaren and Alpine arrived in Imola this morning. McLaren posted a video on Twitter in which the staff is unloading the truck. Alpine takes a bit more time because they first make an appreciation post for the trucks in sunny Imola.

It’s a nice and early start for the team as we begin set-up for another big weekend. #ImolaGP pic.twitter.com/BXMmLA5zQf

Preview | Second chance for Verstappen or will Mercedes also celebrate in Imola?