The teams on the Formula 1 grid have their work cut out for them getting the most out of the Pirelli tyres and optimising those big new front wings, but apart from that, not a lot has changed in F1 itself. Still, a new F1 game has hit the shops again: F1 2019! The question is: how does it hold up compared to its predecessors? You'll get an answer in this GPblog review of F1 2019!

Starting from the bottom

One of the most heavily requested features in previous F1 games was for Codemasters to add junior Formula's, so players would get that real 'road to glory' type of feel rather than starting in Formula 1 itself, the peak of motorsport. And they've delivered. In F1 2019, you get the option to start out in Formula 2 and work your way up. However, there is a catch.

The new feature is part of the heavier focus on rivalries in this year's game. In F1 2018, rivalries already played a part in your progress as a driver, but in the new game, there is a real focus on it. Yourself and another upcoming driver don't get along, which results in battling each other on track regularly. The idea is really fun, but the execution leaves something to be desired.

If you're expecting to race for a full F2 season in career mode, you'll get short-changed. A series of events on several tracks take you through the season rather than actually racing the full season, before you make the step up to F1, as does your rival. No matter which team you choose, Codemasters always makes sure your rival gets put in a similar team in terms of performance. Interesting detail: we chose Racing Point and took Lance Stroll's place, while our rival went to Haas to take Kevin Magnussen's seat. Odd choice, but we digress. 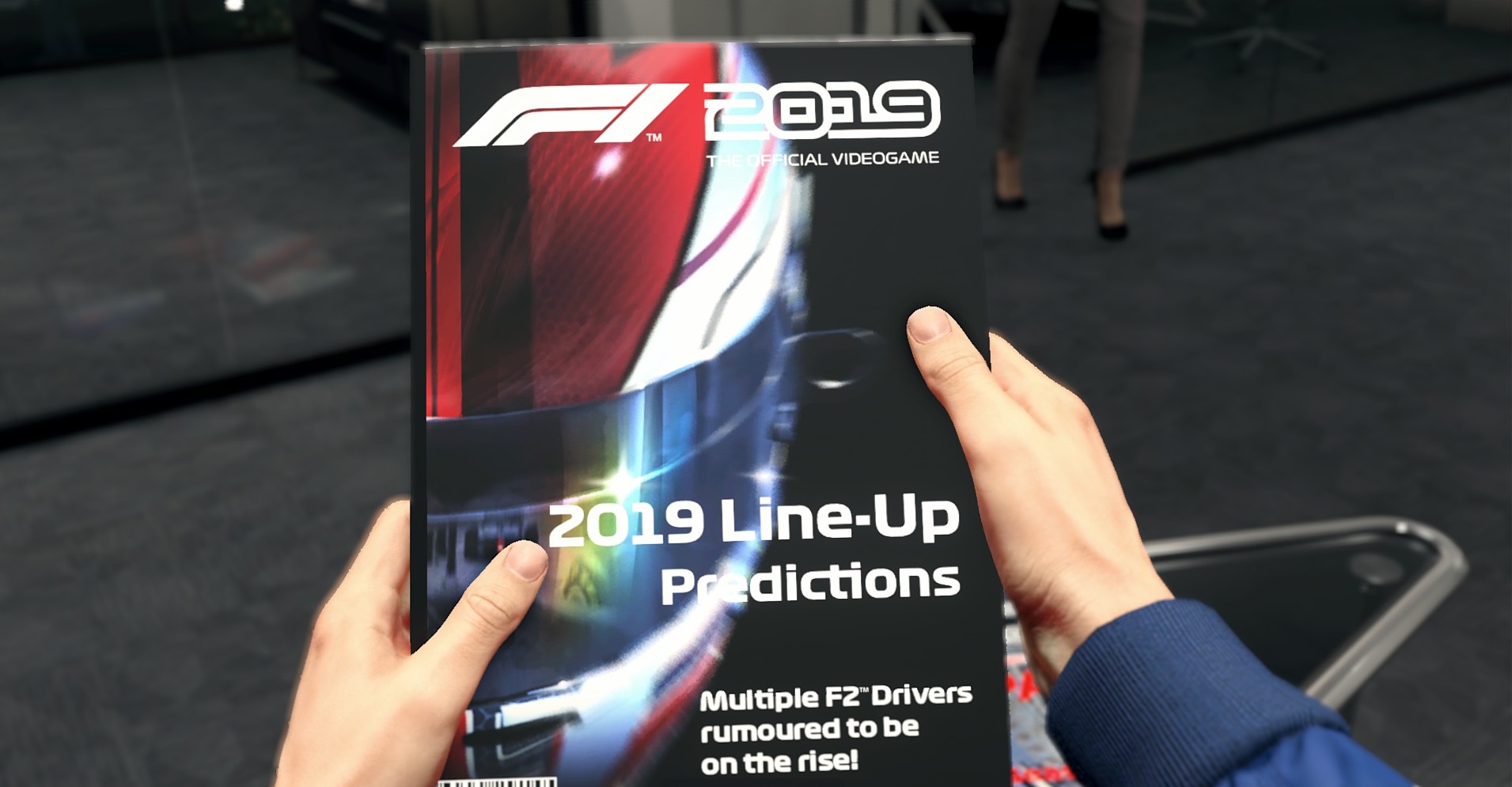 Another interesting new feature in career mode is how drivers will actually swap seats based on performance. For example, say Valtteri Bottas chucks his W10 in the wall every race and Lance Stroll is constantly in the points, the young Canadian could make the step up and replace the Finn. Usually, this happens at the end of the season, but knowing the short fuse of the people at Red Bull Racing...

You can do a full F2 season if you want (or go straight to F1 without your rival), but you will have to do it as a 2018 team. The 2019 F2 grid will be added later as free DLC. You can either do a full or a shortened season. It's a really fun addition to the game, particularly if you enjoy banging wheels with equal cars! Note: set-up in F2 cars is much more limited than in F1. 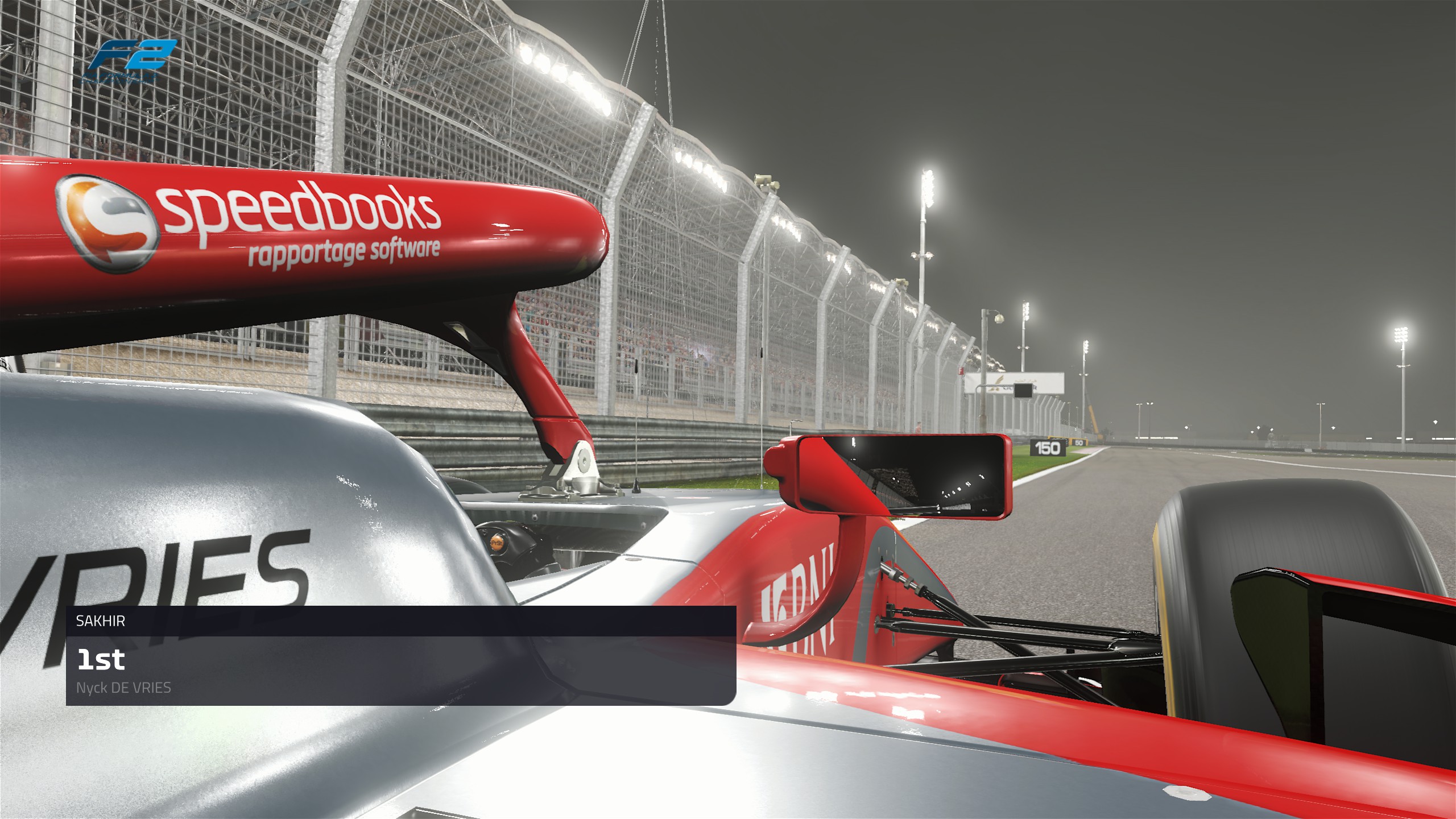 Speaking of set-up - once you get to the Formula 1, you'll be facing a big challenge. For those who have played earlier instalments of the F1 games, you'll be accustomed to downloading or creating your own set-up for a car on a certain track, going out on track and tweaking it after feeling too much oversteer or understeer. One of the ways to tweak your cars has disappeared: you can no longer adjust the ballast of the car.

As a driver, that means you'll need all your time in free practices to find the right balance in your car. If you choose to run low drag (and therefore low downforce as well), you'll need to adjust other parts of the car if you don't want to understeer too much. In real life, Ferrari is the living proof of this: you can be quick on the straights, but if you can't rush through corners, you won't win any races.

The graphics of F1 2019 are one of the major improvements, and the lighting in particular. All cars (except for Ferrari and Red Bull, whose cars have matte finishes) are way more shiny in F1 2019, which really makes a difference in night races like in Bahrain. All the floodlights bounce off the Halo and the front of the car, making it feel that little bit more realistic. On the RB15 and the SF90, the Halo looks a bit shinier than in real life to make use of those new features, but they're still clearly the worst looking ones because of the matte finishes.

The game was played on a high-end PC (RTX 2080 Ti) with all settings set to maximum. Afterwards, it was played on a lesser build (GTX 1070) and lastly on a PlayStation 4. Particularly between PS4 and high-end PC's, the difference is quite visible, but the difference between the two PC builds was very manageable. Playing with framerate over 60 worked nicely with everything on max. if you have a 1070, which doesn't cost a lot these days. Not a lot more than a decent steering wheel, anyway!

Speaking of wheels (we're getting good at these seamless transitions): do you need a wheel or can you play with a gamepad? Our Dutch colleague David, who does track guides and plays online competitively says he needs a steering wheel, pedals and the whole thing, but honestly, a controller will do just fine.

Of course, tyre management will be tougher as your steering will be less fluid with a joystick, but fortunately, the rubber in F1 2019 isn't nearly as tough to deal with as it seems to be in real life this season. Lifting and coasting will get you a long way, you'll just have to absolutely floor it to win back time.

For fun, we tried racing with mouse and keyboard (NOT recommended) and it works up to a point. Don't expect to walk your way into P1 in qualy with a Williams with the AI set at 100%, but hey. Don't think that's a massive revelation.

So, a steering wheel will prove to make a difference compared to a gamepad. Particularly as the wind seems to play a bigger role in F1 2019. When getting onto the main straight in Bahrain, you do notice that breeze right before the hard braking zone for T1, and if you're playing on a gamepad, you will make mistakes quicker because of that little bit of wind. The wheel allows you to make those small but crucial adjustments. 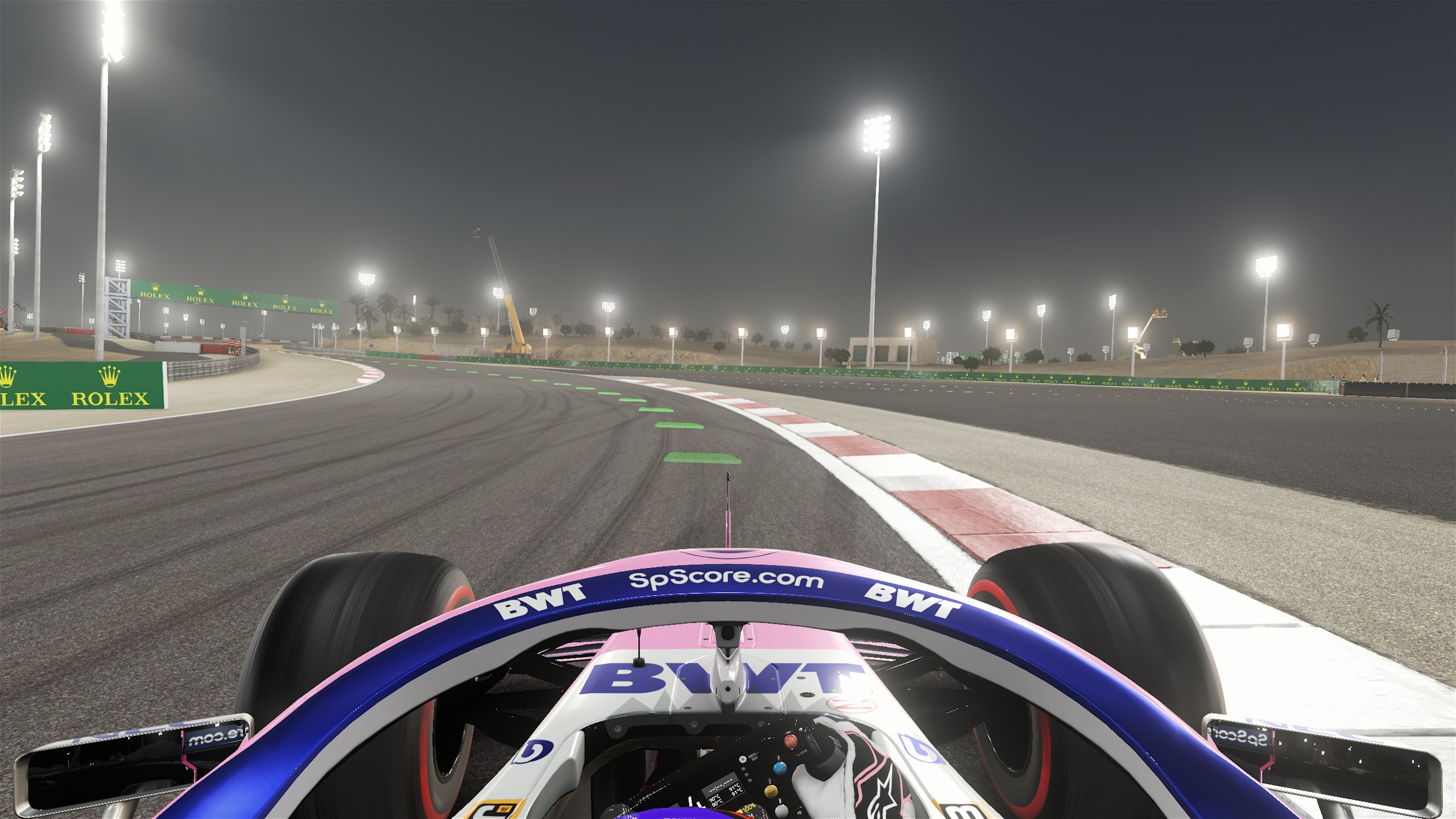 So, the game looks better, it's that little bit harder to stay out of the armcoats and there's been a very entertaining addition in Formula 2. Are there any things under the category 'there was no need for that'? Not really. Maybe the microtransactions.

An important thing to bring up is that modding comes in two ways of F1 2019. You can either pay for it with real money, or earn points the hard way by doing events. So, there's an easy way and a hard way.

Apart from a clear (and easy) way of starting or joining a league with either friends and/or other online players, there are also weekly events. At the dawn of the game's release, it was the British Grand Prix, for example. Participate in Free Practices heavily, and you'll get 'Competition Points'. Not a lot of them, but it's something.

After that, you do a qualifying session and your time gets posted on a leaderboard. A few days after, the actual race takes place and you'll get a certain score depending on your result. The higher you are on the leaderboard (top 50%, top 20%, etc.) the more CP you get. You can then use these points to buy a new livery for your car, a new colour gloves or a new helmet design. You don't see a lot of it when you're actually racing, but customisation is important for online players, and it's a smart move from Codemasters to integrate it into F1 2019.

Obviously, you can break out your wallet, draw your credit card and buy a 'premium livery', if you want to. You won't gain an advantage if you spend money on the game, though, unlike some other online games, which is fair on online players who aren't as well-off. The only disappointing this is that you're dependent on online competition to earn points for the liveries that dón't cost real money. A bit disappointing maybe, but also fair, seeing as the liveries you unlock are only useable in multiplayer. 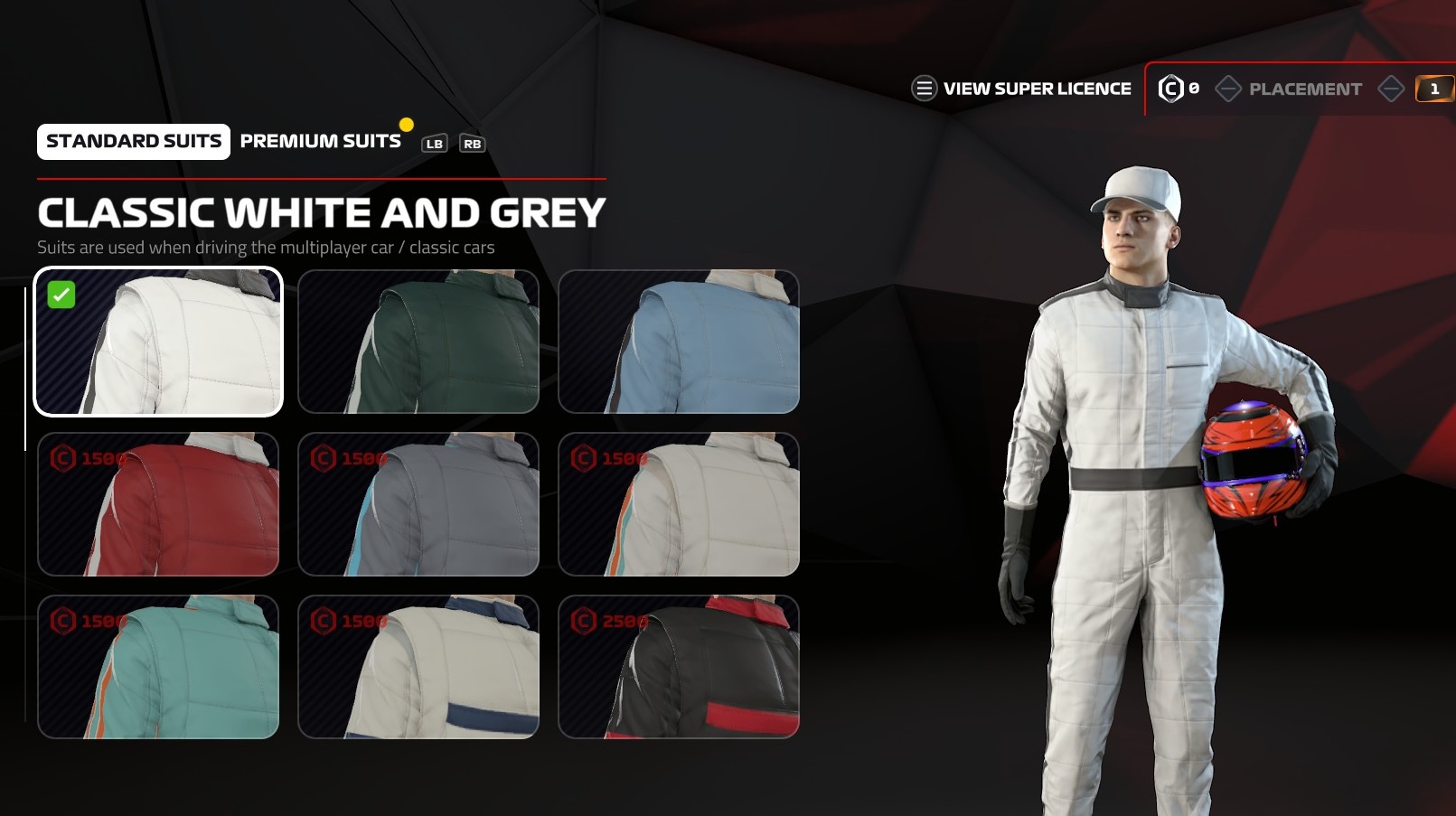 We briefly discussed it in our preview: the Legends Edition. Liveries (for multiplayer cars, helmets and gloves) of Ayrton Senna and Alain Prost are added to the game if you have that edition, as well as a few challenges you can complete as either Senna or Prost. "Is that it," we asked out loud after the preview. The answer: It is. It's much like the invitational events in previous games: racing against each other with Ayrton and Alain's cars. Well, it's more like improving on your rival's score or overtaking him on-track. It's a fun gimmick, but nothing more.

There is no real technical advancement in F1 2019 compared to 2018, but the improvement in graphics is very noticeable. Cars shine more in the sun and particularly under the floodlights at night, and tyres have the shine as well that they have in real life (for the first lap). The removal of ballast makes tweaking your car a little bit more difficult, but that is the biggest challenge in the new game.

The addition of Formula 2 is a big plus. Don't take your rivalry too seriously (or evade it all together by doing the season as an existing F2 driver). Seeing as F2 engines sound much nicer in our opinion than F1 cars (partly because of the V6 hybrid, partly because of the game sound) the junior formula does make for a nice cleanser of the pallet, a nice distraction or addition to just F1 cars. It is a bit of a shame it's not fully integrated in career mode with a full season, though.

If you like having a shinier helmet or having a different logo on your gloves, F1 2019 will be perfect for you too. If you could care less for cosmetic customisation like that, no problem: you don't lose any time on track by spending money on those things.

All in all, we do recommend the game for all of the small tweaks we've discussed in this review. We would buy the game either way just because it has the 2019 cars in it, but we're glad to report F1 2019 has made a genuine step forward in terms of graphics, immersion and online experience. We can't wait to start logging endless hours!

Oh yeah, and fan favourite Claire is back to ask you questions. Bit more variation in her questions, but still annoying. 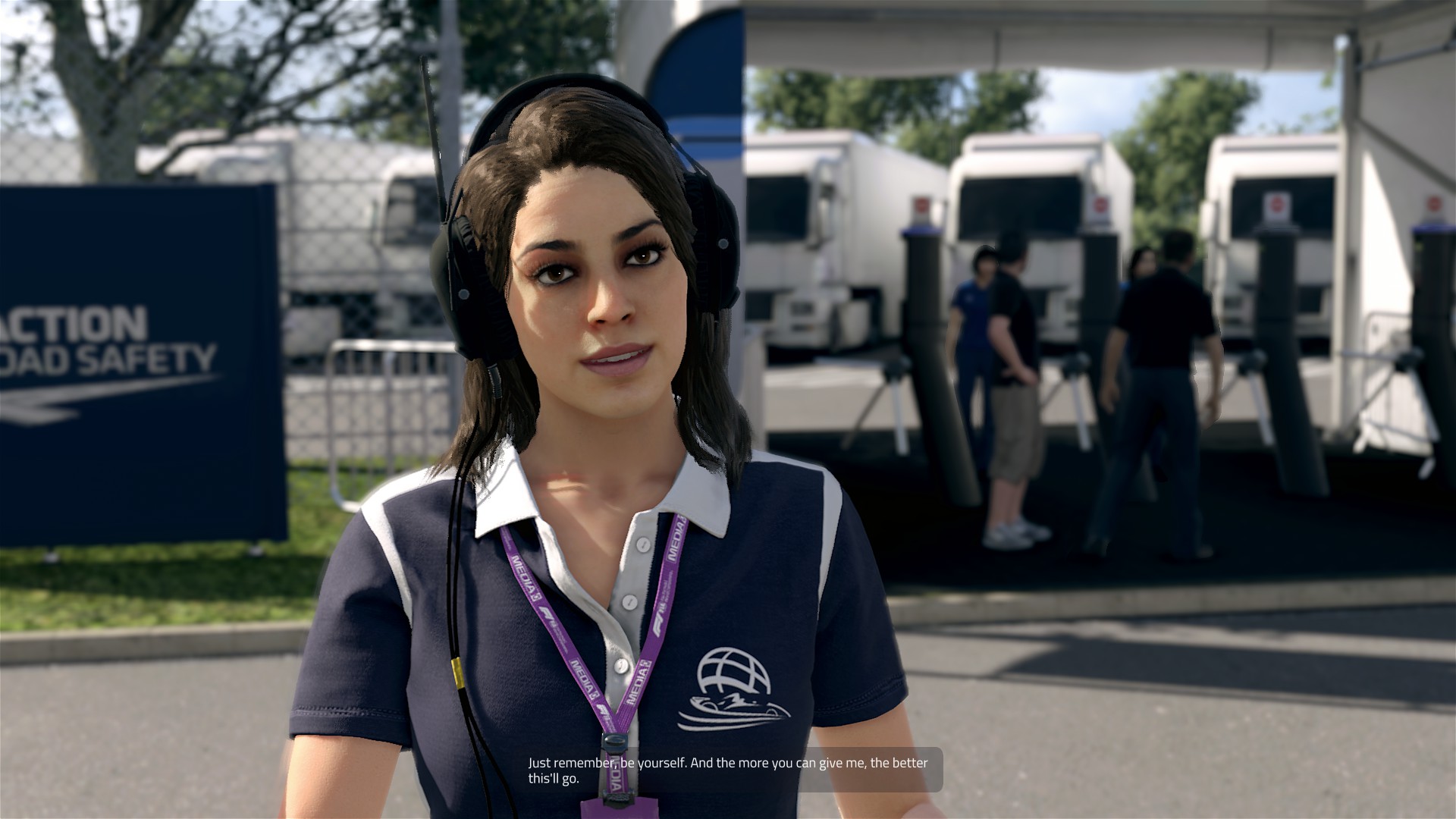