The battle for the constructors' title of 2021 in Formula 1 is still open, but Mercedes is the favourite after the Saudi Arabian Grand Prix. The German team took 23 points more than Red Bull at the Jeddah circuit and so the lead of Toto Wolff and co. has increased considerably.

Thanks to Lewis Hamilton and Valtteri Bottas, 41 points were scored. This brings Mercedes to a total of 587.5 points after 21 Grands Prix. Red Bull Racing has collected 559.5 points so far, which puts Mercedes 28 points ahead.

Sergio Perez's retirement in Abu Dhabi will make it difficult for Red Bull to regain the constructors' world title for the first time since 2013. In the premier class of motorsport, however, nothing is impossible this season.

Ferrari is now as good as certain of third place in the team championship, while Alpine's fourth-place of Esteban Ocon on Sunday appears to have dealt the final blow to rival AlphaTauri.

Red Bull will not pursue new case against Hamilton with stewards

FIA to negotiate with Red Bull: 'Wouldn't call it a deal' 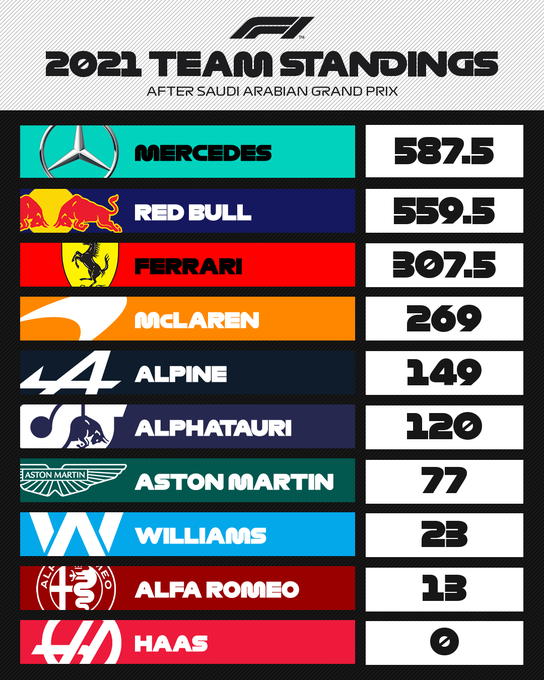