Lewis Hamilton had an outburst in Zandvoort. During the Dutch Grand Prix, the Brit expressed his frustrations over the team radio, but he now regrets that.

Not for the first time in 2022, Hamilton was not fortunate at a Grand Prix. The seven-time world champion had qualified ahead of his teammate and drove a strong race towards the second place. A bad call from the team to let him out on old medium tyres while the competitors came after him on new soft tyres after a safety car did not go down well with the Briton.

Wolff fears: 'We will be employing even more lawyers'

Hamilton lashed out at his team over the radio, saying they had screwed him. The first emotion was perhaps a little intense in the car and after the race Hamilton already showed regret. In a story on his Instagram page, Hamilton once again apologised.

Jos Verstappen pokes at Mercedes: 'You would say they have learned from it'

''We are a team Mercedes, we are world champions and we don't always get it right. I didn't get it right last week and we didn't get it right today (Sunday), but we win and lose as a team. We have been through worse. Everyone is doing their best and that's all we can do. We will rise and win again. I have 100% faith in this team and where we are heading,'' Hamilton revealed. 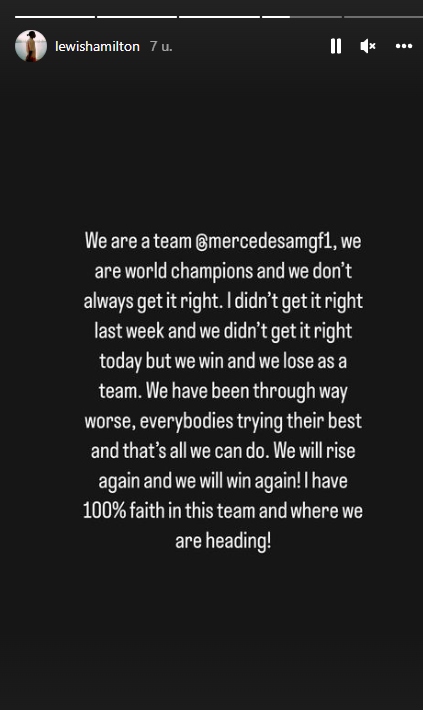