In a season when some of the biggest names in Formula 1 change teams, it is always special to see them in the new team colours for the first time. Aston Martin's social media channels were very secretive about this on Tuesday, thus luring Mercedes out of the tent.

Earlier today, Aston Martin posted images of someone arriving at the Silverstone factory and later a photo of someone's feet. This person was wearing racing shoes and obviously also racing overalls. On Twitter, everyone assumed that this had to be Sebastian Vettel, but there was no confirmation.

Jordan: 'Hamilton will sign a deal with Mercedes within a week' 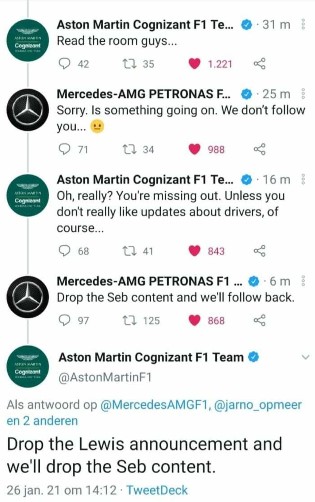 Red Bull to wait longer for decision: 'Vote did not take place'

Mercedes' social media channel immediately jumped on the hype. They wanted more images of Vettel and otherwise, they would not follow Aston Martin's channel. Aston Martin, however, rebounded by demanding that Mercedes then announce Lewis Hamilton. It put its money where its mouth is with a video showing Vettel walking into the factory wearing a green jersey.

Hamilton: 'If I had stayed there I would be a one-time world champion now'

Ladies and Gentlemen... Seb has entered the building. #WelcomeSeb