The World Motor Sport Council met in Paris on Wednesday for its second meeting of 2022, which was chaired by FIA president Mohammed Ben Sulayem. During the meeting, a number of rule changes were agreed that will soon take effect in Formula One, the organisation announced on its official website.

One of the most notable changes is a rule on the engine, which the FIA hopes will improve reliability. Until recently, it was not permitted to make temporary repairs to the engine, but that is about to change. In some cases teams will be allowed to do so in the near future, possibly avoiding the need to change parts. Teams will also be allowed to replace the engine with a new specification between qualifying and the race. All this must be done within the parc fermé rules.

Another rule change concerns the cooling of fuel, where Red Bull Racing, among others, narrowly escaped a possible penalty. Soon, teams will be allowed to cool fuel to a temperature of twenty degrees Celsius during hotter races, using a reference temperature to be specified. There will also be a change to the mirrors, with the aim of 'enabling better rearward vision. What this rule change exactly entails is not yet known.

Furthermore, changes have been approved regarding the flexibility of front and rear wings and the way this is tested. Another notable change relates to the tyre tests carried out by the teams in collaboration with Pirelli. The FIA clarified that it is not permitted to 'test parts, software, changes to parts or changes to the set-up that give the participant any kind of information not related to the tyre test'. Previously, both Ferrari and Mercedes were presumably testing new parts during this tyre test in preparation for a major update package.

Finally, the FIA announced that it intends to finalise the engine regulations for 2026 before the next meeting of the World Motor Sport Council. This means that it is unlikely to happen during the summer as Mercedes team principal Toto Wolff had hoped. 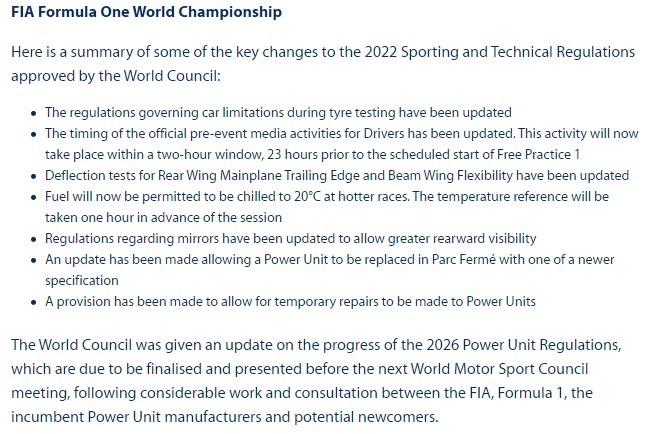