Nyck de Vries seemed to be on his way to his second win in a row in Formula E, but good team play from Venturi and touches with Lucas Di Grassi and Jean-Eric Vergne ensured that the Dutchman eventually dropped through the field. Robin Frijns impressed by claiming second place. The win went to Edoardo Mortara.

Start according to plan

De Vries had an excellent start when the lights went out, the same goes for Frijns. Both Dutchmen consolidate from first and third place respectively. The first run with attack modes was very calm. At the head of the field, everyone kept their place and there are no position changes.

When the men at the front activate attack mode for the second time, the game is really on the line and it gets interesting. Di Grassi is the first to activate his boost, he went for an undercut. It gave the Brazilian first place, but because his first extra power disappeared early again, teammate Mortara overtook him.

The Dutchmen are the victims of the team play at Venturi. De Vries was in third place but still had to do use his attack mode. Activating it cost about one and a half seconds, so his gap increased. Frijns also comes alongside and so the driver from Sneek must return to the front of the field from P4. He does not succeed with his attack mode, but according to his Mercedes team, he drove more economically in the first half-hour and should be able to benefit from that in the absolute final stage.

Verstappen back behind the wheel: His vacation is over

Spa circuit finds successor to director who passed away

De Vries, however, does not even get that chance. Vergne, at that moment drove in fifth place, attacked the 26-year-old driver. De Vries suffered damage, resulting in a tenth place and one World Championship point. Meanwhile, Frijns still did incredibly well and overtook Di Grassi for P2 with ten minutes left on the clock.

Just after that, the safety car came out. Alexander Sims parked his car on the side and so the whole field joined behind leader Mortara. However, the race is not seriously restarted and so the 35-year-old Swiss is the lucky one. Frijns is second, ahead of Di Grassi. 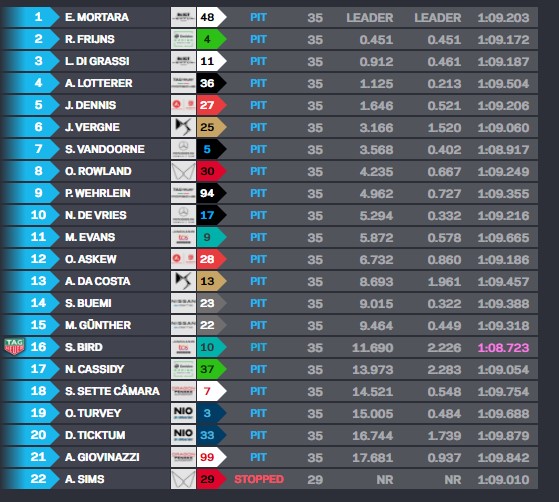 Hamilton will come back twice as strong: "That's just how he is"